CEsA will screen one of the first post-independence Mozambican films, “O vento sopra do Norte”, on January 28 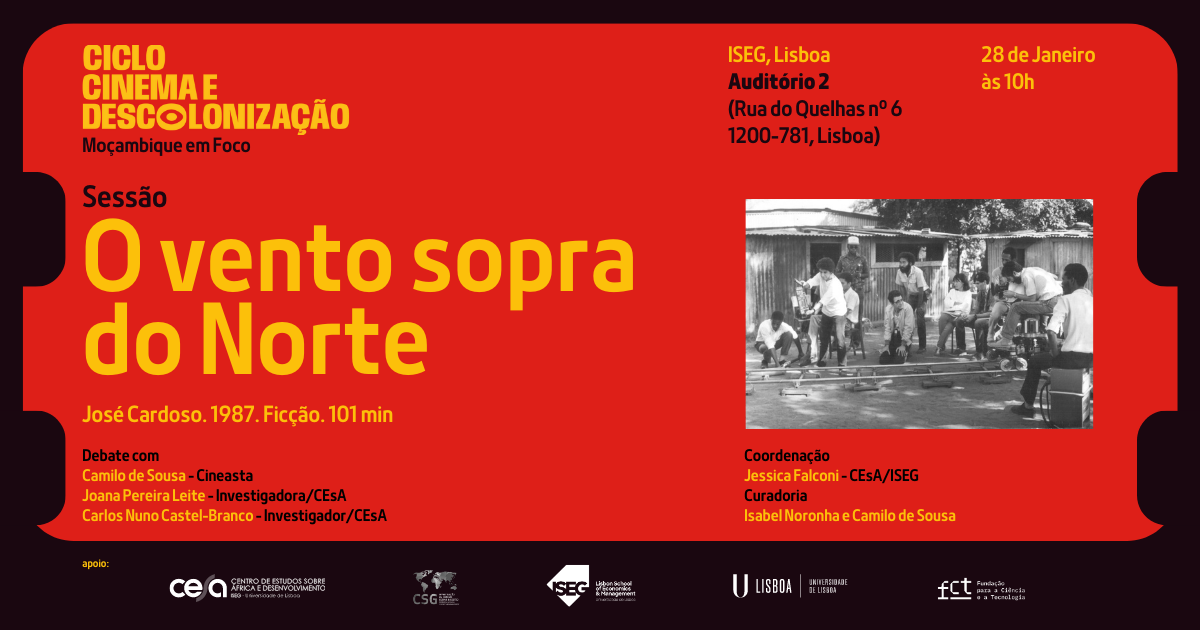 The Centre for African and Development Studies (CEsA/CSG/ISEG/ULisboa) is pleased to announce the screening of one of the first incursions of the post-independence Mozambican film production, “O vento sopra do Norte” (José Cardoso, 1987 , Fiction, 101 min). The session is free admission and will take place on January 28, 2023, at 10 am, at ISEG – Lisbon School of Economics and Management (Auditorium 2, Rua do Quelhas n. 6, 1200-781, Lisbon, Portugal).

The film will be played in Portuguese. There is no pre-registration. The capacity of the auditorium is in order of arrival.

Two young students, Renato and João, discuss the racism they face daily and the contradictions of Portuguese colonialism in Mozambique. Zita, a young employee at a store in the city, also complains about the discrimination she suffers at work. The whites in the city are concerned about the rumors about the military actions of the so-called “terrorists”, the guerrillas of the Liberation struggle. In indigenous neighborhoods, arrests are feared and suffered. The climate of the last years of Portuguese colonialism in Mozambique is full of tensions. The Wind blows from the North is the wind of liberation.

About the Cycle “Cinema e Descolonização: Moçambique em foco”
The project urges to understand decolonization as a process still in progress, which must be accepted and integrated into the social, political, cultural and personal dynamics. The project aims to create an open and dynamic space for sharing, where memories, narratives, dialogues and reflections can emerge. It is coordinated by Jessica Falconi (CEsA/CSG/ISEG/ULisboa) and curated by the Mozambican filmmakers Isabel Noronha and Camilo de Sousa.

The film club will take place from January to July 2023, with screenings once a month, always on Saturdays, where it is intended to debate and reflect on the legacies and memories of decolonization in Mozambique. Each session will have the spoken remarks of producers, directors, etc., as well as moderators and debaters who will facilitate the debate within the audience.