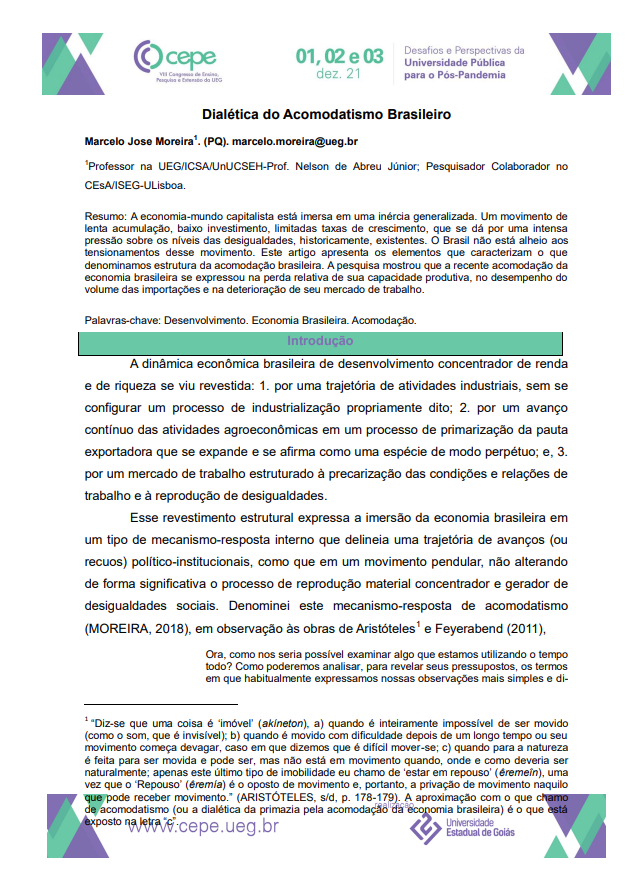 
The capitalist world-economy is immersed in a generalized inertia. A movement of slow accumulation, low investment, limited growth rates, which is caused by intense pressure on the levels of inequalities, historically, existing. Brazil is not oblivious to the tensions of this movement. This article presents the elements that characterize what we call the structure of Brazilian accommodation. The research showed that the recent accommodation of the Brazilian economy was expressed in the relative loss of its productive capacity, in the performance of the volume of imports and in the deterioration of its labor market. 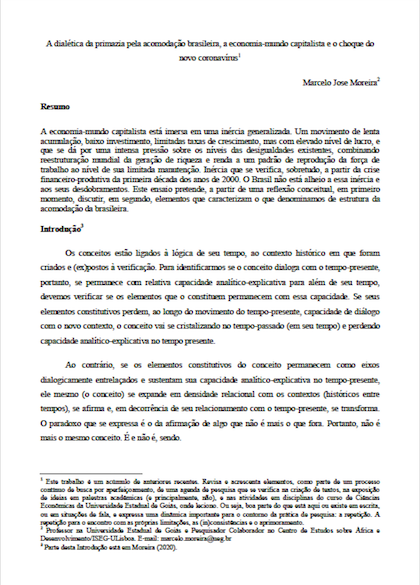 
The capitalist world-economy is immersed in a generalized inertia. A movement of slow accumulation, low investment, limited growth rates, but with a high level of profit, and which is given by intense pressure on the levels of existing inequalities, combining a worldwide restructuring of wealth and income generation with a workforce pattern of reproduction to the level of its limited maintenance. Inertia that is verified, mainly, from the financial-productive crisis of the first decade of the 2000s. Brazil is not oblivious to this inertia and its consequences. This essay aims, from a conceptual reflection at first, to discuss, secondly, elements that characterize what we call the structure of Brazilian Accommodation. 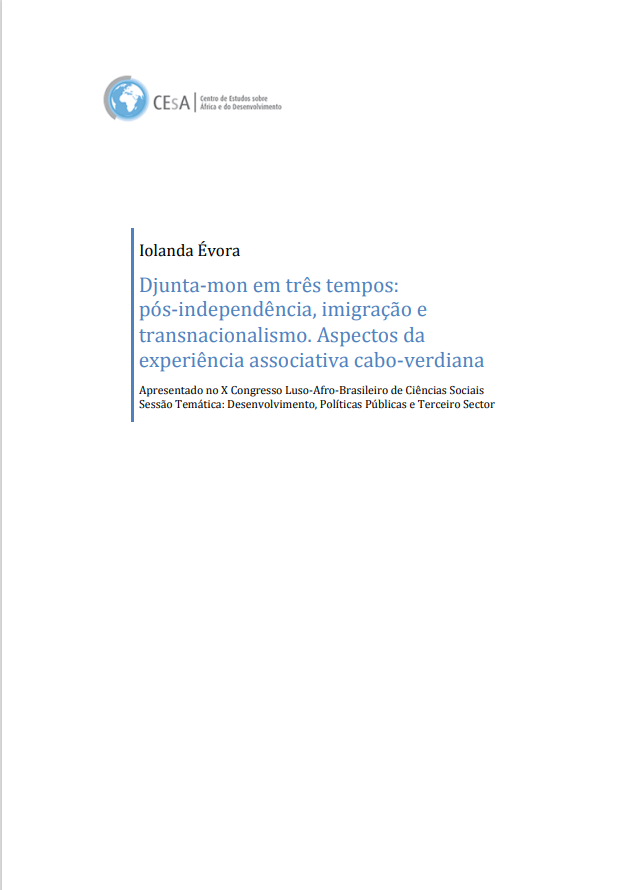 
This study focuses on voluntary associations and discusses the material and psychosocial conditions of membership and participation of members. These aspects are analyzed from the point of view of the members of cooperatives in the rural area of ​​the island of Santiago, created in the post-independence period, and of Cape Verdean immigrant associations in Portugal. In Santiago, we identified both singular forms of appropriation of the official ideological base and governmental objectives, as well as cultural permanences that, through practices such as djunta-mon, ensure the protection of social identities and allow familiarity and subjective control of this social practice. . In immigration, spontaneous associations propose to maintain identity, promote social inclusion or solve common problems and needs and reflect the heterogeneity, social cleavages and class divisions of origin that are reproduced in immigration. Currently, formal demands for greater rigor and technical and human competence in its functioning seem to weaken spontaneous and voluntary adhesion and the djunta-mon. At the same time, it questions the traditional role of these associations in the face of changes in immigration with the inclusion of new profiles such as transnational migrants. We examine the adaptability of this collective strategy, indicating that in the past, in the present and in the face of the possibility of a transnational associative practice, the use of the traditional djunta mon adapted to the lived context, ensures the maintenance of the strong network of reciprocity and sociability essential to survival and success. of the associations. 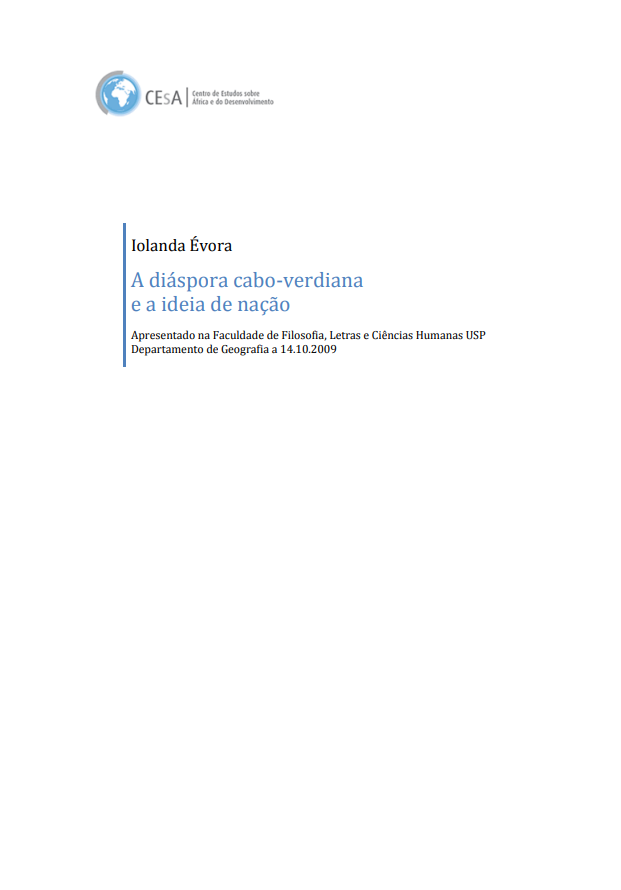 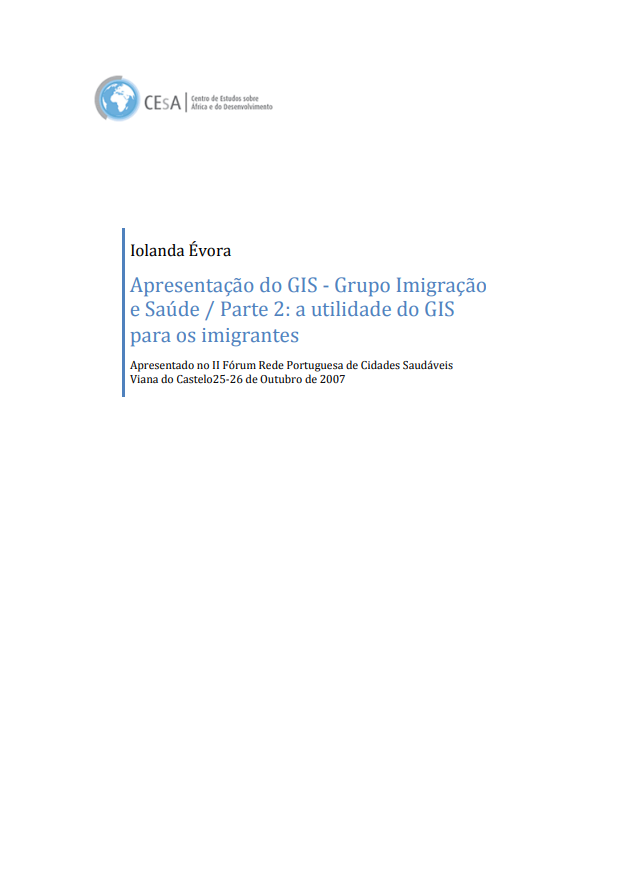 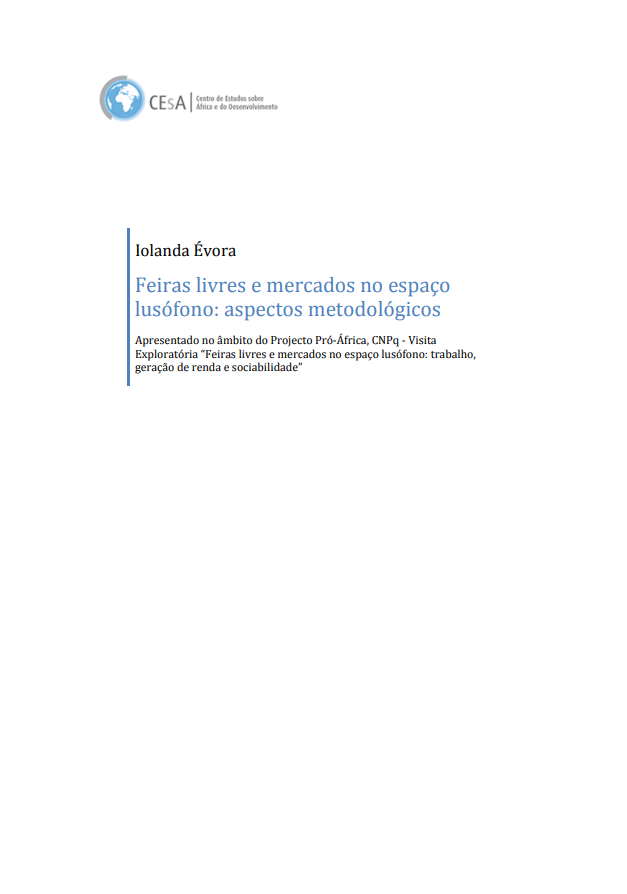 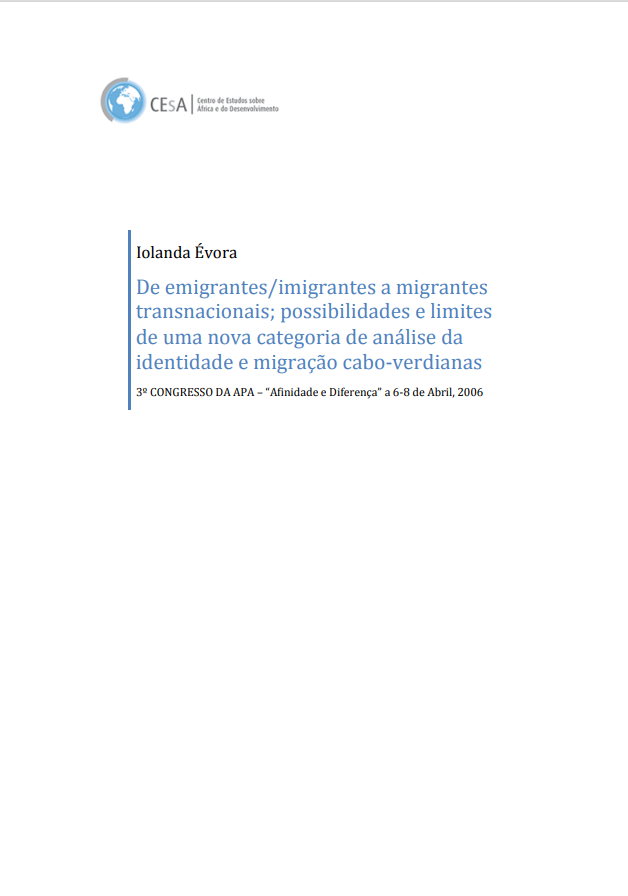 
In the field of Cape Verdean migration, transnationalism has been consolidating itself as a new lens for approaching the old experiences of exchanges and participation in social practices that transcend national borders. At the same time, studies on Cape Verdean identity and migration show the preponderance of the dual existence of emigrants/immigrants as a way of recognizing people and groups. In this work, we propose to examine the correspondences or oppositions between the evident consolidation of Cape Verdean transnationalism as an object of study of the social sciences and the possibilities of constituting a new identity constellation through which individuals and groups recognize themselves as transnational migrants. Transnationalism and identity are concepts whose juxtaposition seems inherent, insofar as, as a social field, transnationalism includes sociological variables that exert a discernible effect on the psychological field of identity. From the perspective of the social field, the changes that the transnational way of living operates in the ways of living assimilation/exclusion in places of immigration and, among other ties, the myth of the return to origin, will be examined. A new dynamism in the construction, negotiation and reproduction of identities means, for each actor, defining themselves differently in terms of class, race and gender. In addition, other social categories may emerge in this context, and even with different degrees of salience among themselves, in the social field, they support the need for new reference structures that can capture the social and economic experiences of migrants in different places. 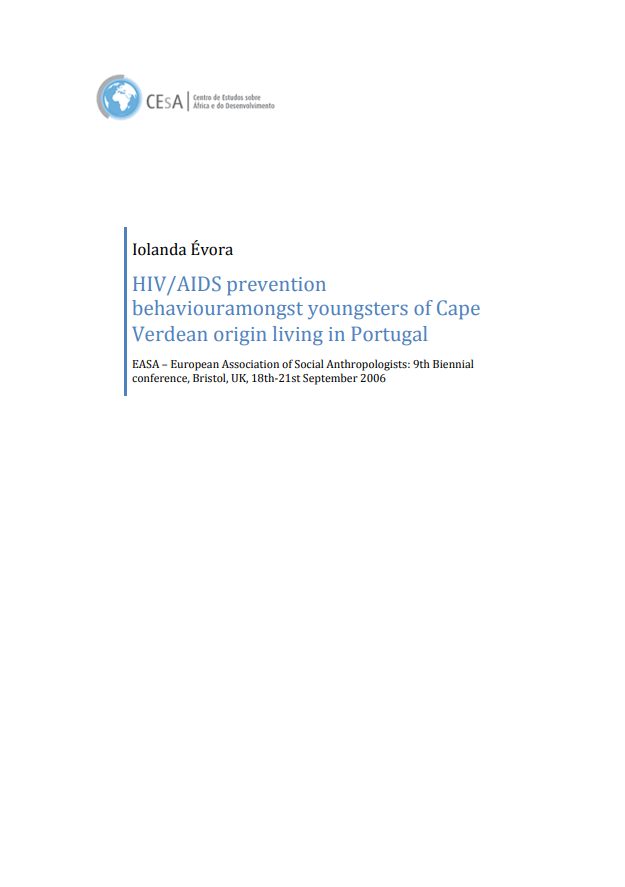 
This paper deals with the preventive AIDS behaviour of youngsters of Cape Verdean origin living in Lisbon. It focuses on the group practices and representations of AIDS and gender oriented sexual behaviour. Based on an ongoing research project, the paper argues how AIDS has the potential to become another discriminatory factor in a group already racially and socially stigmatized. This research aims to understand the relation between what young people know about HIV/AIDS and their active prevention behaviour. In addition, it explores how the immigration context may interfere in their behaviour and opinions towards HIV/AIDS and in the practices considered the safest ones to adopt. Therefore, this research is amongst those that aim to ground HIV/AIDS health education proposals on a clear understanding of how different populations or groups conceive their own healthcare. For that purpose, we selected a sample of young people from Cape Verdean origin presently living in Portugal, born in or outside of Cape Verde. Both genders were equally present (8 men and 7 women), aged between 16 and 26 and living in council estates, in other words, housing built on council’s urban redevelopment projects to relocate people from the slums. The areas of interest were chosen for presenting a high number of Cape Verdeans or their descendents: Lisbon, the Greater Lisbon and Loulé. We presuppose that belonging to these areas implies a particular social and economical context; for, although debatable, the definition of ‘council relocation housings’ conveys, to a great extent, a social categorization applied by a system of social classification to immigrants in Portugal. Accordingly, we considered eventual repercussions on the youngsters’ social experience and on their material and symbolic existential conditions, upon which rely daily decisions concerning health and prevention. A qualitative methodology of data collection was adopted, to allow an exhaustive explanatory study and the identification of several perceptual and behavioural patterns. Such methodology, developed by Rodrigues (1978,1999), is the most adequate to reach ‘irrational’ content – denomination commonly applied in Social Sciences to factors that “exist, but cannot be apprehended by reason” (Rodrigues, 1999, p.4). As the author refers, it is about reaching “that which cannot be measured, but is worthy of being known”, more specifically, the emotional content and deeper meaning of youth’s explanations regarding HIV/AIDS prevention behaviour. Thorough individual interviews were carried out, aiming to collect a material able to reveal the representations, the type of perception, the explanatory resources used, the justifications produced according to the roles occupied within a certain group, particularly, their position regarding immigration and HIV/AIDS. By using self-examination (free discourse), we were able to identify main areas of interest and concern, their importance, how they interrelate with their life and the surrounding world. Moreover, aiming to identify exactly how the interviewees place the AIDS issue within their life concerns. Intermediary Questions enable us to explore HIV/AIDS issues relevant to the project, though not spontaneously raised by the youngster during the Free Discourse approach. The Socioeconomic Questionnaire enabled an understanding of the life conditions of this group in Portugal, as well as of their family history. Today we shall discuss here the subject of family migration in its different phases and by each individual. 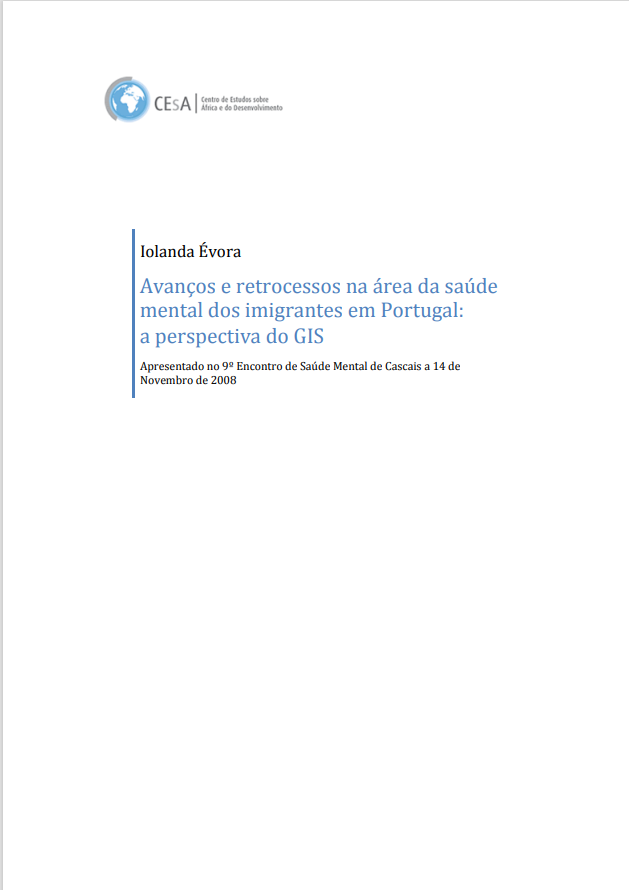