Special issue of the Review of African Political Economy, edited by Carlos Nuno Castel-Branco/CEsA, is open access until June 30th 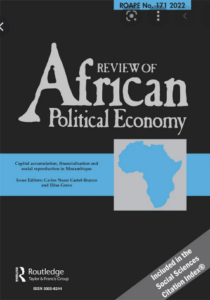 The most recent special issue of the Review of African Political Economy (RoAPE), “Capital Accumulation, Financialisation and Social Reproduction in Mozambique” (vol 49, issue 171, March 2022), edited by Carlos Nuno Castel-Branco/CEsA and Elisa Grecco, can be freely downloaded until June 30, 2022. It provides a political economy critique of contemporary Mozambique, articulated around the analysis of the historical conditions under which its mode of capital accumulation was formed.