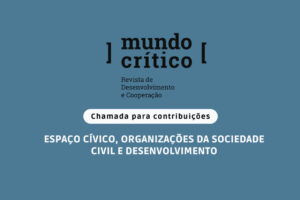 Mundo Crítico #6 is open for contributions until the 31st of May. This sixth edition seeks to bring together reflections on the challenges of the different spheres of civic space and the implications they have for Development, exploring their multiple dimensions and the way in which NGOs and other groups seek to overcome obstacles and broaden their scope for action.

How is civic space defined in different societies? What mechanisms and practices have been carried out to claim a more open civic space in different contexts? Has the pandemic crisis exacerbated the restrictions on civil society on a global scale? What impact will these restrictions have in the future? How do NGOs, civil society organisations and more informal civic movements operate in the public sphere? What new expressions is the participation of informal groups in the public sphere taking on?

These are some of the starting questions for the construction of Mundo Crítico #6 – Civic Space. Civic space is one of the central pillars of full and open democracies. The level of freedom with which citizens organise, participate and intervene in a society is one of the main indicators of the quality of civic space and democracy. Through freedom of association – to an organisation, group or political party, for example; of assembly and expression, we can claim rights, influence public policy and even shape political and social structures.

If you are interested in participating, don’t hesitate. Consult the edition’s regulations and be part of the project.

You can consult previous volumes of Mundo Crítico here.